I am so excited to partner again with Rachel's Random Resources for another blog tour. Yesterday, this was supposed to go live and due to life it never did. So here I am today to bring you a fantastic one! 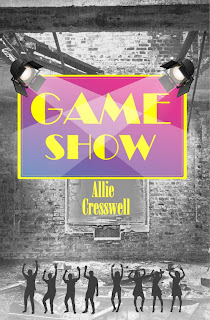 It is 1992, and in a Bosnian town a small family cowers in their basement. The Serbian militia is coming - an assorted rabble of malcontents given authority by a uniform and inflamed by the idea that they’re owed something, big-time, and the Bosnians are going to pay. When they get to the town they will ransack the houses, round up the men and rape the women. Who’s to stop them? Who’s to accuse them? Who will be left, to tell the tale?
Meanwhile, in a nondescript northern UK town a group of contestants make their way to the TV studios to take part in a radical new Game Show. There’s money to be won, and fun to be had. They’ll be able to throw off their inhibitions and do what they want because they’ll all be in disguise and no-one will ever know.
In a disturbing denouement, war and game meld into each other as action and consequence are divided, the words ‘blame’ and ‘fault’ have no meaning and impunity reigns.


Game Show asks whether the situation which fostered the Bosnian war, the genocide in Rwanda, the rise of so-called Islamic State in Syria and the ethnic cleansing in Myanmar could ever happen in the West. The answer will shock you.

I have been writing stories since I could hold a pencil and by the time I was in Junior School, I was writing copiously and sometimes almost legibly.

I did, however, manage a BA in English and Drama from Birmingham University and an MA in English from Queen Mary College, London. Marriage and motherhood put my writing career on hold for some years until 1992 when I began work on Game Show.

In the meantime, I worked as a production manager for an educational publishing company, an educational resources copywriter, a bookkeeper for a small printing firm, and was the landlady of a country pub in Yorkshire, a small guest house in Cheshire and the proprietor of a group of boutique holiday cottages in Cumbria. Most recently I taught English Literature to Lifelong learners.
Nowadays I write as full time as three grandchildren, a husband, two Cockapoos, and a large garden will permit.

The television Game Show featured in the novel has created the facsimile of a mortar-damaged street in the studio environment. The show’s crew are dressed in military-style clothing and are behaving like troops. Leo, the show’s presenter, encourages the competitors to enter into the illusion.
The contestants have been set various challenges to complete in their journey to win the prize. Here, theatrical techniques and sound effects are used to create the idea that a helicopter is coming - impossible, within the studio, and yet compelling to the disorientated participants.
A cold wind began to blow up the street, pleasant and refreshing at first, then uncomfortable, chilling the sweat on their skin. From above, somewhere unfeasibly high, a throbbing hum began to electrify the air: something was coming. The hum clarified into a throb, then into a tangible beat. Pinpricks of light got bigger, closer. The people on the ground looked up, mystified, into the impossible sky. Some of the troops pointed upwards, caught in the growing beams of penetrating light.
Leo moved amongst them. ‘Look!’ he said, grabbing somebody by the arm and gesturing upwards, ‘Look! A helicopter! Two! Three!’ He ran from one to another, spreading the excitement, creating the reality; nothing, within it, was too ridiculous. Impossible for helicopters to be inside a building, but if Leo asserted it, they looked up earnestly for them. His conviction, the grim compulsion of the guards. The contributory elements of scenery and lighting, the clear willingness of others to buy into it all. And, as they adopted the roles assigned, their own ensuing loss of self-awareness. Soon everyone was out on the street, their faces up. The noise began to vibrate the very breath in their bodies, the downdraft snatched and caught up their hair, their clothes. The lights were so bright they could not see beyond them.
Leo changed tack, his excitement turning into an infectious anxiety. ‘What will they bring? What will they drop?’ he asked one person after another. ‘Shall we run? Shall we wait? What shall we do?’ The people turned to each other in confusion. If he didn’t know, how on earth should they? His apparent uncertainty infected them with doubt. They hovered, the instinct for fight or flight at war within them. People began to shout half-coherent instructions and warnings to one another.
The whole building began to shake and quake, its unknown construction and proportions seeming to afford no protection at all. Chelsea and some of the teenagers became frantic, attempting to escape past the guards up the raked seating to the greenly glowing exit sign, but they were roughly prevented. The main doors were discovered to be locked. The man in the wheelchair remained stationary in the increasing glare of lights, both arms aloft, a gesture of welcome, of worship, baptized in light from on high, his eyes closed in a kind of ecstasy. People clung to one another, perfect strangers become soul-mates, related by circumstance, lives and bodies and emotions irrevocably fused by Armageddon. Encapsulated in a kettle of sound – metallic, mechanical - Kate screamed and screamed, her voice a vehicle for all her frustration and fear and every ounce of pent-up emotion her body contained, but in the overwhelming din of the helicopter blades, it seemed that she only stood amongst a crowd with her mouth wide open and her eyes tight shut.
A point of crisis arrived. The sound, the wind, the lights, the very air, threatened to burst their hearts inside their ribs. Anything was possible, now, even life, even death. Suddenly the air was thick with snow, a kind of snow, white and paper-soft, dry and warm, falling, swirling, landing feather-light upon them. The din from the helicopter blades began to recede and the wind to decrease and the probing arc lights were replaced by the cold glow of a winter sunrise. The total reversal, from an imminent threat to gentle promise, was too much for some; they wept and trembled. Others passed into a kind of euphoria, holding out their hands in wonderment, palms-upwards, receiving the blessing, and looking at each other with faces dawning with delight. The snow turned into iridescent shades, every conceivable color, the flakes becoming larger, like rainbow fragments, and gathering around their feet in pastel cascades. The momentary silence was a beautiful respite, but it could not last. The music of conflict surged back into the air around them, pulling them back into Game Show reality.