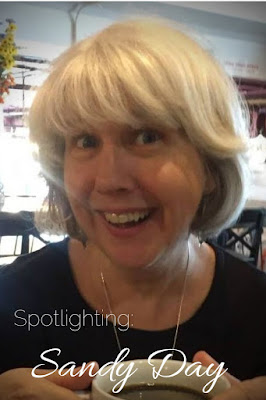 Sandy Day is the author of Fred's Funeral and Chatterbox Poems. She graduated from Glendon College, York University, with a degree in English Literature sometime in the last century. Sandy spends her summers in Jackson’s Point, Ontario on the shore of Lake Simcoe. She winters nearby in Sutton by the Black River. Sandy is a trained facilitator for the Toronto Writers Collective’s creative writing workshops. She is a developmental editor and book coach. 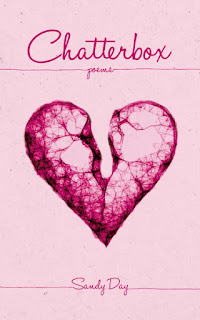 Chatterbox is a collection of one hundred and ten poems, tiny tellings written during a year of marriage disintegration. The poems explore a world of bewildering emotions ranging from sadness and terror to anger and enlightenment. The reader enters a world conjured from fairytales and dolls, the Garden of Eden, and the Wizard of Oz; the pages abound with moths and mice, dogs and horses, roosters and crows, oranges and apples, the moon and the sun.

A creative force, exploding after decades of silence, inspires the Chatterbox poems. The poet struggles to attend to a Muse that wakes her each morning, urging her to capture a spirit igniting inside her. The poet observes her own life as it falls apart and fragments then miraculously turns her outward toward others.

Whose heart hasn't cracked open and broken? Do any of us withstand the pain and transcend to the other side? Can we leave betrayal and abandonment behind without bitterness and resentment? Can we move on and find our true soaring spirits? Chatterbox answers these questions with a resounding, yes!

The Inspiration behind Chatterbox

2009 was the year I fell in love and my marriage ended. Apparently, that's what happens when you fall in love with someone who's not your husband. Then my lover dumped me.

The experience broke me. The love and lust and grief and anger twisted me up so tight — I broke. I couldn't work, I could barely concentrate, my kids went hungry because I stopped cooking and shopping, and there was nothing I could do to change any of it. It was as though I was possessed.

From the time I was eight or nine years old I'd written poetry. My poems won creative writing prizes in school and I chose my university because I wanted to be taught by a poet I admired. Throughout, I continued to have pieces published in journals across Canada. But after university, life took over and I ended up in a family business, married, with two children. For twenty long years, the only thing I wrote was advertising copy and employee performance reviews.

Then 2009 happened. As the love affair began, I was inspired to write poetry. And by inspired, I mean an urge shook me and whispered so loudly in my ear that I couldn't ignore until I scratched the words down on a piece of paper. I started to share my writing with my lover and from there the inspiration exploded. I woke up in the mornings and staggered over to my notebook to transcribe poems that seemed to be dictated from somewhere beyond me. My husband thought I was nuts.

Part of my inability to work was because of the poetry - it was non-stop. I even scribbled down lines while I was driving. Over the course of the year I wrote some three hundred poems.

The love affair ended. Abruptly. Horribly. I was completely heart-broken and humiliated and worst of all, alone. In the year that followed, I cobbled together an account of the mighty inspiration. I wrote a concordance for the poems that explained the story behind their creation. It was raw, squirmingly personal, and ultimately cathartic. I published it in 2011 as Chatterbox: Poems.

The book didn't sell because I never tried to sell it. A few of my friends purchased a copy. Some read it, some didn't. Over the years, I often thought about the Chatterbox poems languishing amongst the clumsy prose. This year, I decided to revise the book, remove the concordance, and re-release Chatterbox as a book of poetry. The response has been exciting. I'm running a Valentines Giveaway on my website, which is gathering dozens of entries. On Goodreads, my Giveaway is attracting a following of poetry lovers.

Since Chatterbox, I have yet to feel the overwhelming inspiration to write poems. I have written two novels, and a plethora of flash fiction but I fear my poems are rare. My Muse speaks to me differently these days but I am still in awe of what my hand produced when I wrote Chatterbox. I hope you enjoy reading it.
Author Spotlight