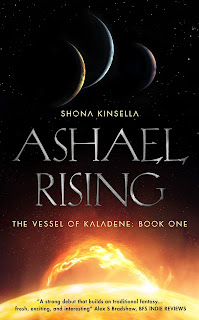 Ashael is a hunter-gatherer woman, apprenticed to Bhearra, the healer and spiritual leader of their tribe.

The Zanthar are invaders from another world who extend their own lives by stealing the life-force of everything around them. They were last seen on KalaDene 200 years ago. They have returned, looking for The Vessel, a being prophesied to hold the life-force of the land.

Iwan is a slave to the Zanthar, descendant of those taken as slaves the last time the Zanthar visited this world. He is sent out as a spy, while his mother is held hostage to ensure his compliance.

When Ashael meets Iwan in the forest, neither realise that she is the one the Zanthar are looking for. The fate of KalaDene and all of its people rests on her shoulders.

Shona Kinsella is the author of Ashael Rising, (Unbound, 2017) the first in her series, The Vessel of KalaDene. She is also one of the editors of the British Fantasy Society’s fiction publication, Horizons. When she is not writing or wrangling her three children, she can usually be found with her nose in a book.

I am so incredibly lucky to be apart of Rachel's Random Resources book tour for Ashael Rising.
The world building is absolutely breathtaking and large in scope. Though it sometimes reads like a young adult novel, I would place it firmly in the new adult genre. There are a few PG fade to black scenes, and most of the characters come across as late teens, early twenties. There are the wise leaders, and a few background characters, but in order to truly build this trilogy, Kinsella had to spend most of her time introducing us to the complexities of the good and evil sides, the prophecy, and the circumstances that lead KalaDene to the world it has become.
While I learned quite a bit about KalaDene, I was also left lacking any connection with any of the characters. There wasn't much to them when it came to emotion. We get plenty of background for Iwan, Ashael, and the other Folk, but the characters themselves lacked sustenance. Proclamations of love are given, but not in a way where there was a slow build or "finally!" moment. And while there is certainly loyalty among our band of heroes, I didn't feel the emotion from any of them.
Given that this book was mostly perfection in terms of world-building, I am more than willing to continue reading the series in hopes that the characters will get their time in the building process.
A free ARC was provided in exchange for an honest review and a slot in the blog tour.
--------------------------------------------------

Did the blurb hook you? Did my review give you hope that it is just as good as it sounds? Enter now!
a Rafflecopter giveaway
Blog Tours fantasy New Adult Young Adult